The US media said that the future size of the US Air Force may be slightly smaller than the current one, and it will rely more on remote-controlled aircraft. The rise of Asia and the rapid increase in space launches will make it face more and more challenges. As the number of scientists, engineers and other highly skilled graduates trained in the United States decreases, the Air Force will strive to maintain its technological superiority.

According to a report on the US Defense Weekly website on July 22, the former US Air Force chief scientist Mark Mayberry wrote in a June report that in order to survive, the Air Force will need to adopt some "game-changing" strategies In order to meet the emerging challenges and global threats by 2027. This may include the adoption of rapid procurement strategies adopted by some private space companies, more use of lasers and other directed energy weapons, and the use of advanced manufacturing technologies such as 3D printing.

The new Chief Scientist of the United States Air Force, Mikea Enzley, said at a breakfast meeting hosted by the Air Force Association on July 11: "If we assume that the future will be the same as today, I think we will be wrong. Even in the next decade, In the future, there will indeed be some important potential threats. We need to be aware of their existence and think carefully. "

The June report was entitled "Looking Globally: The US Air Force's Global Technology Concept". Mayberry said in the report that by 2027, the size of the U.S. Air Force â€™s manned aircraft may be slightly reduced. But the Air Force â€™s remote control aircraft and unmanned aerial vehicle missions may increase substantially. Enzli said that due to the drastic reduction in the cost of drones, the United States should also pay attention to the proliferation of drones worldwide.

The report says that most drones today are designed for intelligence, surveillance, and reconnaissance missions, but countries are investing heavily in the development of combat drones. The report said that some drones may be able to release chemical, biological and nuclear weapons, and the United States needs to develop various technologies to detect and defeat them. The report said that advanced fighters may also spread throughout the world, which will reduce the air superiority enjoyed by the United States. By 2025, 70% of foreign air force combat forces will be equipped with fourth- and fifth-generation fighters. The enemy may also obtain modern systems, such as advanced missiles and other weapons that can challenge the US Air Force.

The report also said that one possible way for the US Air Force to counter the increasing air capabilities of other countries is to develop and deploy high-energy laser weapons.

Mayberry said that if the aircraft has a more adaptable structure, including modular sensors and detection devices that can be "plug and play", this will allow the Air Force to quickly upgrade the weapon system. However, unless the Air Force strengthens cybersecurity, this approach itself poses a threat. He believes that to make the Air Force â€™s procurement process more flexible in the future, the Air Force needs to learn from some private space exploration companies.

Enzli said: "Our technology must have more flexibility. We can't just build a fixed system. Maybe we will update it one day in the future. We must ensure that our system can be modularized. Build so they can modernize and upgrade very efficiently. "

The report also emphasized that the shrinking manufacturing base of the United States would jeopardize the Air Force's ability to design, develop, manufacture, and deploy advanced technologies. But the rise of 3D printing can help resist this recession. For example, 3D printing allows researchers to quickly print the parts needed for the prototype. Fighters can quickly obtain parts through 3D printing to repair damaged systems in combat.

Mayberry is also very concerned about the worldwide competition for top scientists and engineers and the decline in the number of graduates in science, technology, engineering, and mathematics in the United States. He said this may damage the US advantage in new technology research and development. 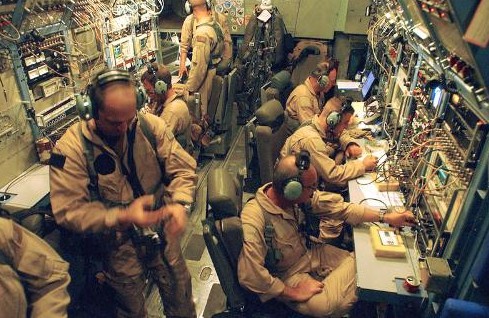 In 2012, the US "Time" weekly listed the 3D printing industry as "the top ten fastest growing industries in the United States." British "Economist" magazine believes that 3D printing technology and digital production mode will become the key factor to trigger the third industrial revolution. At the end of 2012, in the article titled "Future Weapons Todayâ€”Five Weapons to Watch in 2013" published on the website of the US Foreign Policy magazine, 3D printed weapons topped the list!

It is conceivable that as one of the advanced manufacturing technologies, the core concepts of digitalization, intelligence, personalization and customization possessed by 3D printing technology will surely trigger an epoch-making revolution in military technology and changes in combat methods. At present, the world's major military powers represented by the United States and the European Union have smelled the atmosphere of this wave, and have successively formulated standards, developed technologies, and promoted applications in order to occupy a favorable position in the new round of military reform. In the future information warfare, the mature application of 3D printing technology will have a positive and far-reaching impact on the promotion of army building and the development of security methods.

Weaponry can be produced anytime, anywhere and on demand

The changes that 3D printing technology brings to weaponry are undoubtedly revolutionary. It can be directly used for the maintenance and support of battlefield weapons and equipment. In the future informationized battlefield, technical support personnel can use the 3D printer they carry at any time to directly print out the damaged weapons and equipment parts, and can re-enter the battlefield after assembly. It is foreseeable that not only small guns and simple materials can be printed in the future, but also large and complex weapons and equipment such as warships, aircraft, tanks, and even military bases can be directly or indirectly â€œmanufacturedâ€ by 3D printers.

At present, it has begun to try a small sword in the war. Foreign media reported that the US Army deployed a 3D printing mobile laboratory to Afghanistan in 2011 to create tools and other equipment for soldiers on the spot. The laboratory can quickly produce prototype products in the theater by using 3D printers and computer digital control equipment to process aluminum, steel and plastics into required parts. The US Army plans to use this approach to enhance the sustainability of individual operations, theater patrols, and small front-line combat bases. At the same time, the US Army is also accelerating the actual deployment of 3D printing technology to improve wartime equipment support capabilities, reduce the cost of weapons and equipment, and enhance sustained combat effectiveness.

Of the 15 3D printing technology institutes established by the US government to revitalize manufacturing, 2 are under the control of the Department of Defense, focusing on the development and construction of military digital databases and new metal materials to simplify the manufacture of "complex weapon systems." .

In the future information warfare, the important value of 3D printing technology is also to make revolutionary changes in battlefield support methods: from relying mainly on the rear to focusing on the position of "DIY", that is, by the combatants self-production operations in the battlefield Required logistics medicines, food and supplies, etc. According to the "Government Plan" released by the US Department of Defense in April 2012, the US military expects to use 3D printing technology to produce on-site food, medicine and equipment that can meet the actual needs in non-war military operations, thereby leading the revolution in logistics support. Sexual changes.

"Zero casualties" on the battlefield have increasingly become the ideal goals pursued by the military of all countries in the world. One of its efforts is to provide timely and effective medical assistance to increase the survival probability of the wounded. However, constrained by many uncertain factors such as time, space, and environment on the battlefield, it is often difficult to achieve optimal results in battlefield emergency rescue. Using 3D bioprinting technology to customize small quantities and digits of damaged joints, parts and even organs can best meet the medical needs of different wounded people. At present, the lifeless repair form printed by this technology has been widely used in the medical industry. It is conceivable that with the perfect combination of 3D printing technology and medical imaging modeling and simulation technology, and the organic unity of living objects in structure, materials and activity, 3D printed bone implants, active cartilage, heart valves, even in humans Direct printing of active tissues and human organs in the body will become the "Noah's Ark" to save the lives of officers and men.

Under the harsh battlefield environment, frequent combat operations, and limited support methods, it is difficult for officers and soldiers to eat scientifically and nutritionally, which not only affects the morale of officers and soldiers, but also weakens their combat effectiveness. Using a 3D food printer equipped with a touch screen, a built-in memory card, an intelligent numerical control system, and a network-connected device, scientifically record the heartbeat, weight, mood, sleep quality, and calories burned by each officer in combat operations through micro-skin implant science Waiting for wireless signal flow, through biometric data and precise numerical control, according to different daily needs and dietary preferences of different combatants, they "print" fresh and healthy food with a reasonable proportion of nutrients for them to protect officers and soldiers in harsh environments Is safer and more nutritious.

Logistics supply is the weakest link on the battlefield that is most vulnerable to attack. The US military believes that the combination of 3D printers with battlefield networks, unmanned transport helicopters or cars will completely solve this problem. Unmanned transport helicopters or cars can continuously transport materials to the base. Under the guidance of the three-dimensional design drawings transmitted by the wireless battlefield network, the 3D printer can quickly produce the required military supplies and realize inventory changes and battlefield needs. Quick response. The US Army is planning to enhance the sustainable combat capabilities of individual operations, theater patrols, and small front-line combat bases through this approach.

The start-up battery is the soul of your vehicle.  It starts the Engine, and generates the energy necessary for the operation of all other vehicle's electric aspects. But did you know that it only has two years of life approximately?  Since during the unloading process and float charging, the battery's negative plate is sulphated fast, Reducing the functional capacity of the battery, until its complete inoperative. That's why we present the start-up Battery Pulse Protector. We offer you a fully automatic battery maintainer and protection system, it works 24 hours a day. Battery protector is not a battery charger. It is a patented electronic Sulfuric Crystal Cleaner which will eliminate the battery sulphation which is the main cause of problems and failures in lead acid start-up batteries. This battery pulse desulfator keeps the battery's condition as new, provides faster starts up your car or truck. Extends battery lifespan up to two or more times and reduce recharge time. Increase the capacity for your charge to last longer between recharges. Helps to protect the environments because it reduce the number of batteries that are discarded every year.

How is it installed? Lugs connect directly to the battery terminals.

Designed especially for frequently-charged 12-Volt battery systems, the 12V Battery smart pulse protector and pulse maintainer ensures maximum performance on both single 12-Volt lead-acid batteries as well as two or three 12-Volt batteries connected in parallel. The battery pulse protector is ideal for any kind of vehicle or UPS with a 12-Volt battery system that is charged on a regular basis, including cars,trucks, ships, emergency vehicles,military battery backup power and vehicles in sudden war,wind and solar power battery, motor, UPS. 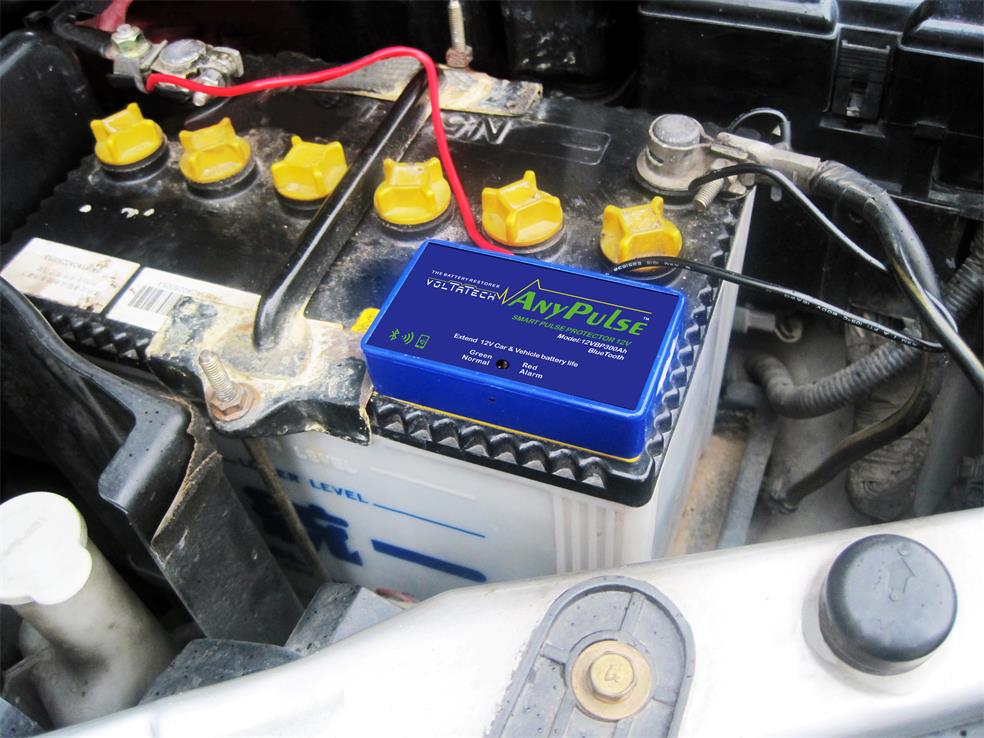