We all know that the motion monitoring function of smart wearable devices is mainly realized by gravity acceleration sensors. Gravity sensors are a very mature technology, and mobile phones have long been used. The sensor obtains some basic data by judging the movement of the person's movement, and combined with the basic information of the personal body signs previously input by the user, according to some specific algorithms, obtain personalized monitoring data for the individual, such as the number of movement steps, the distance, and the calories burned. To determine the frequency and intensity of the movement.

Sleep monitoring is also achieved through the same sensor technology. When people are in different stages of sleep, brain waves will change rapidly. Interestingly, gravity acceleration sensors do not have the function of directly detecting brain waves, so it is the measure of the magnitude and frequency of people's movements during sleep. To determine which stage sleep is, Apple's Apple Watch's alarm function is based on this judgment that the user is in the "quick eye" period to wake up the user.

However, the gravity sensor of the existing products can only reach the maximum extent here. Since the sensing speed of the sensor limits the recognition degree, they cannot recognize more, such as what gesture the user makes, whether the palm is up or the back of the hand is upward. 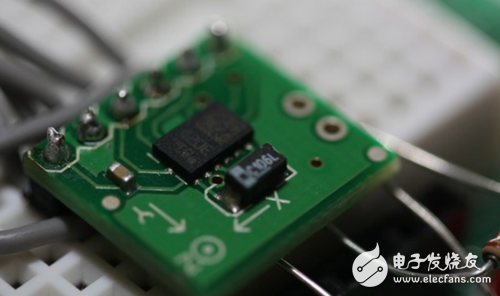 On the other hand, in heart rate monitoring, Apple Watch (including Gear Fit, Fitbit Surge, Microsoft Band and other bracelets) uses a photoelectric heart rate meter, its principle is very simple - through the green LED lights on the back of the Apple Watch, When the blood is red, it can reflect red light and absorb green light. When the heart beats, the blood flow increases, the absorption of green light will increase, and the heart beats. At the time of the gap, the blood flow is reduced, and the absorbed green light is also reduced. Based on this, the heart rate can be measured based on the absorbance of the blood. 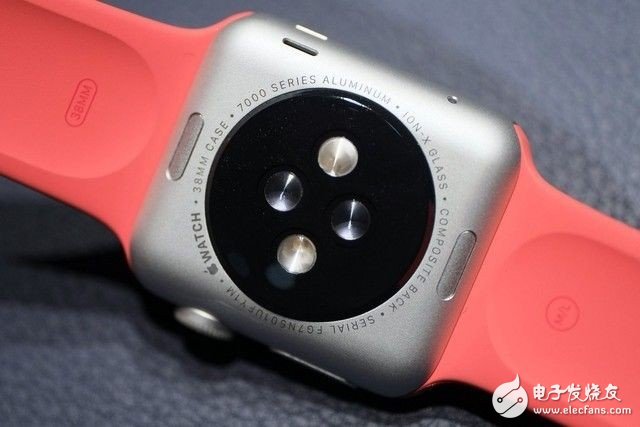 The working principle of the photoelectric sensor requires that the device be close to the wrist, and the hair should not be too strong, can not sweat, and can not be measured during exercise. This is why Apple will advise users to keep their watches close to the skin during heart rate monitoring. In addition, Apple also said that in the cold weather, the blood flow of the user's wrist may not be enough to monitor the heart rate, and When users are performing rate-based exercises (such as running and cycling), the accuracy of heart rate measurement is more accurate than random motion (such as playing tennis). These are also limitations of photoelectric heart rate monitoring.

Since the blood flow rate has actually slowed down as blood flows into the wrist through the capillaries, the final result does not necessarily reflect the heart rateâ€”that is, the heart rate data monitored using the Apple Watch may not be as good as some. The phone is accurate, especially in the case of a hand-held machine, since the index finger of the person has an arterial blood vessel, and the latter can maintain the same frequency as the heart.

How to make the data of the wearable device accurate, this is the problem that many smart wearable products want to solve.

For now, the most practical solutions are two, one is to add more sensors, the other is to develop better sensors and more advanced algorithms. For the former, the more sensors, the more sensors Can bring more comprehensive monitoring results, but it will also cause equipment size and battery life. For technical reasons, the development of sensors still has a long way to go. Non-implantable electrochemical and biosensors are the main evolutionary direction. But the leading R&D team has found the starting point for optimizing the sensor â€“ boosting the sensor.

In October of this year, Weifeng.com reported that researchers at Carnegie Mellon University have developed a system called ViBand that allows existing smart watches to recognize user gestures and identify objects on the user's hand. news.

The role of the Viband system is to pressurize the accelerometer sensor of a typical smart watch - to put it bluntly, it is to "snap the chicken blood" to the sensor, so that it can sense small changes in the incredible vibration frequency. It can sense not only the buzzing of the engine while it is running, but also the tuning of the guitar, or the apparent slight difference caused by the user moving the arm in different ways.

According to reports, the secret of the Viband system lies in the specifications of the accelerometer sensor itself. Generally speaking, the accelerometer in the watch is set to perform 20 to 100 samples per second to meet the measurement requirements of the watch for the motion track. Using a software update, the researchers increased the detection frequency to 4,000 times per second and used the accelerometer as a vibrating microphone. In other words, it can also monitor the bioacoustic signals emitted by the user's body.

In this way, when the fine frequency of any action propagates through the human body, everything can produce a unique high-frequency vibration mode, a sonic feature that can be immediately used for recognition. Each gesture or behavior can be used to perform a specific task after being processed by the ViBand system.

This sounds amazing. With this technology, the smart watch will be able to distinguish between a large number of detailed user actions, including scratching, scratching, tapping, sliding, etc. These actions can be further used to operate the watch, slide menus and select watch menu options. Even controlling household appliances such as lamps or televisions. 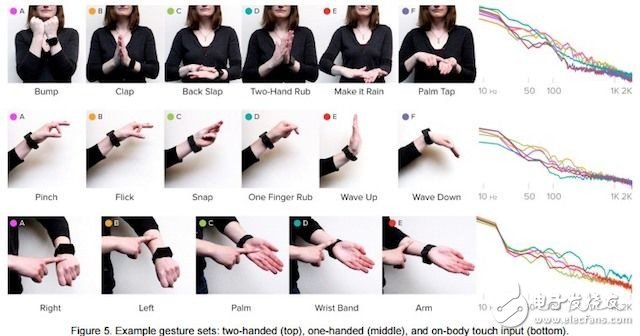 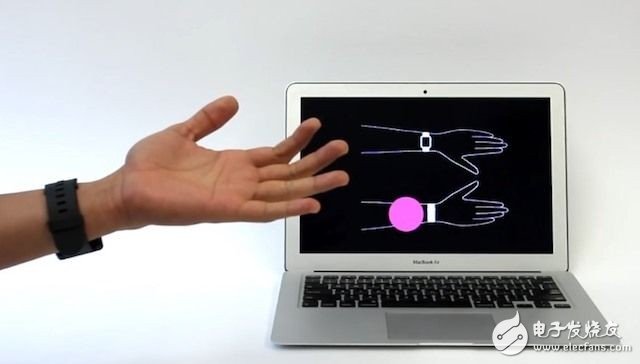 What's more, the supercharged sensor, as long as the user takes something, your watch can use the sound signal to identify what you are taking; in addition, you can detect the user's environment, such as In the car, still in the kitchen... The team also made an identification tag attached to the door, on the wall or on other items to match the lift recognition and provide intelligent control.

The ViBand system is very compatible and can be used on Apple, Samsung and any smart wearable device. However, we don't know whether the booster technology will damage the sensor or whether it will consume more power. Obviously, the R&D team will continue in this direction, and hold a computer association user interface software and technology seminar in Tokyo. The team's research and development has won one of the "four best papers".

The research on smart wear health monitoring is more medically worthwhile. This is done by big companies such as Apple and Microsoft, as well as smart health brands such as Fitbit. Smart bracelets such as Fitbit Charge HR and Microsoft Microsoft Band can continue to track all day long. User heart rate, providing valuable data. But given the current technology, these devices can only do this.

Currently, C8 Medisensors is still struggling to solve the â€œnoiseâ€ problem. Echo Labs, a small company that started out of the Stanford University incubator Start X, achieved initial results. They developed a smart bracelet prototype that detects oxygen, carbon dioxide, pH, carbohydrates and blood pressure in the blood. Echo Labs measures blood components through light sensing and a proprietary algorithm. The sensor penetrates human tissue by emitting electromagnetic waves and then measures the reflection of different optical frequencies to detect the concentration of molecules in the blood.

According to the project founder, â€œAny molecule will react to light at a certain frequency. If we know the frequency, we can detect the molecular condition. But the lower the concentration of the molecule, the more difficult it is to capture. Oxygen molecules and carbon dioxide molecules are different in nature and therefore reflect different frequencies. Each molecule has a light signature."

The use of light and laser to solve important indicators such as blood inside the human body is the direction that many R&D teams are working on. The results of Echo Labs will bring breakthroughs to existing research. 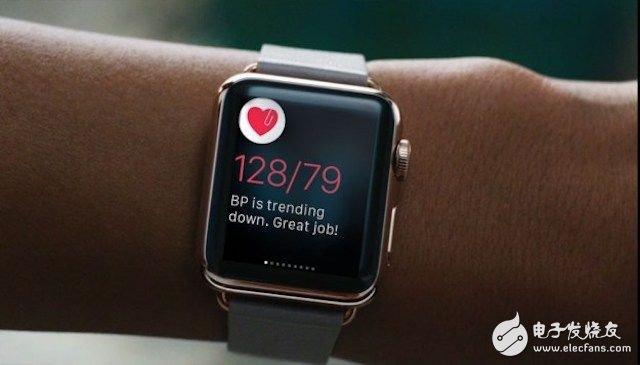 If future technologies such as ViBand and Echo Labs can be better integrated, then smart watches are undoubtedly in the smart tracking, health data monitoring, and have been greatly evolved.

The real role of smart wearable devices, we are waiting for answers

As we have discussed many times in previous articles, how smart wearable devices such as Apple Watch will develop in the future is probably something that Apple can't answer.

Under the premise that only one mini screen of about 1 inch can be equipped, it is necessary to ensure comfortable wearing and functional evolution, break through the original screen interactive interface, expand to more gestures, and enhance detection capabilities (including external objects). And the inside of the human body) is the key. This is far more meaningful than adding a bunch of apps to a smart watch, but it's more difficult.

Maybe not long after, when these new technologies mature, we will not have to worry about the use of smart watches and smart bracelets.

Welcome OEM/ODM order,accepted small order start from 100pcs. If you have any questions, please do not hesitate contact with us.iPhone battery are produced by