TCP/IP is a protocol necessary for transmitting data on the Internet. This network communication mode has been improved between PCs, but the size, price and other factors limit the scope of its application. Therefore, the design of network communication based on TCP/IP protocol and Ethernet embedded system has become a hot topic. The system realizes the acquisition of digital TV transport stream (TS) signals and transmission in Ethernet in the embedded system with TI's TMS320DM643 as the core. The system can easily realize the transmission and scheduling of digital TV transmission stream signals in the local area network. The digital television transmission stream source is a digital cable television signal for the European Digital Cable Broadcasting System Standard (DVB-C). The network access hardware is implemented in an embedded system with TMS320DM643 as the core. The network access software is implemented by TI's TCP/IP NDK (Network Developer's Kit) network development kit for the C6000 series DSP.

The circuit is mainly composed of five parts. The block diagram of the digital TV transmission stream network acquisition system is shown in Figure 1. 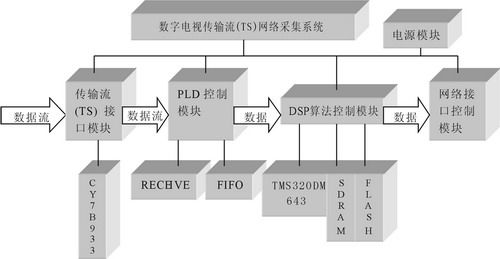 Its main function is to collect digital TV signal through the transport stream interface module and enter the PLD (Cyclone EP1C6Q240C8) chip. After necessary processing, the signal is sent to the DSP (TMS320DM643) chip for storage and algorithm processing. The necessary configuration of the BCM5221 is performed by the TMS320DM643, and the data stored in the TMS320DM643 is transmitted to the local area network through the BCM5221, and the data is received by the computer.

In the project, this part of the hardware is selected by Altera's EP1C6Q240C8 chip.

The main function of this module is to implement the interface with the CY7B933 receiver chip, receive data from CY7B933, and cache data. This part of the function is implemented by functional modules written in the VHDL language. There are two main functional modules: RECEIVE and FIFO. The RECEIVE module is mainly responsible for receiving data fields from CY7B933; the FIFO module is mainly responsible for buffering data.

The function of the RECEIVE module is to interface with the CY7B933 receiver chip to receive data from the CY7B933. It works by receiving data on the basis of a transport stream packet.

When the boundary is detected, the RECEIVE module starts receiving packets. The counter will count from zero, enabling wrreq to output a valid signal while receiving data, and output the data to the next stage. When counting to 188, it indicates that a packet reception is completed. When the data of a packet is received, the counter is cleared, and ts188 is set and held high for one clock cycle. The next cycle detects if the data is 0x47. If it is, it indicates the boundary of the next packet; otherwise, it indicates that an error has occurred and returns to the state of detecting the packet boundary mentioned in the previous paragraph.

In addition, there will be a dedicated counter in the PLD module to record the number of empty packets. When receiving the data packet, it will first detect whether the data packet is empty. If it is an empty packet, the PLD module will delete the empty packet and the counter. Add 1 to China. If the received packet is not empty, the value of the counter is added to the private field of the packet and buffered into the FIFO. The counter is then automatically cleared. The purpose of processing the data packet in this way is to reduce the data traffic transmitted by the network, so that more transport stream data can be transmitted. Adding the value of the counter to the private field is to restore the original empty packet after the computer receives the data, thus ensuring the integrity of the original transport stream data.

The function of the FIFO module is to receive data from the RECEIVE module and cache it. When the RECEIVE module receives a complete transport stream packet, it will send an interrupt signal of ts188 or ts204 to the DSP, and the DSP will start the EDMA function to receive data from the FIFO module. The DSP and FIFO modules are connected asynchronously, and the specific receiving operations are described in the DSP section.

In order to achieve the above functions, a basic system with TMS320DM643 as the core must be established.

The system expands 4M x 64bit SDRAM memory (MT48LC4M32BPG) in CE0 space for storing programs and data. The operating clock of the SDRAM is provided by the ECLKOUT1 of the TMS320DM643, which is the same as the operating clock frequency of the EMIF. In this system, the default ECLKIN is its clock source, which is 133MHz.

The system expands the 4M x 8bit flash memory (Am29LV033C) in the CE1 space. Before the read/write access to the Flash, the CE1 space of the EMIF control register CE1CTL is required to configure the CE1 space as an 8-bit asynchronous memory interface and read/write timing.

The TMS320DM643 integrates an EMAC+MDIO on-chip peripheral. EMAC is the abbreviation of Ethernet Media Access Controller, which is the Ethernet media access controller. MDIO is the abbreviation of Management Data Input/Output, which is the management data input/output module. EMAC+MDIO is used to provide an interface to Ethernet physical layer (PHY) devices, where EMAC provides a data path for the interface Ethernet PHY and MDIO provides a management information path for the interface Ethernet PHY.

The block diagram of the TMS320DM643 network interface is shown in Figure 2. Figure 2 depicts an EMAC control module between EMAC+MDIO and DSP. It mainly contains some necessary logic to make EMAC use DSP more effectively, and control some logic of reset and interrupt. 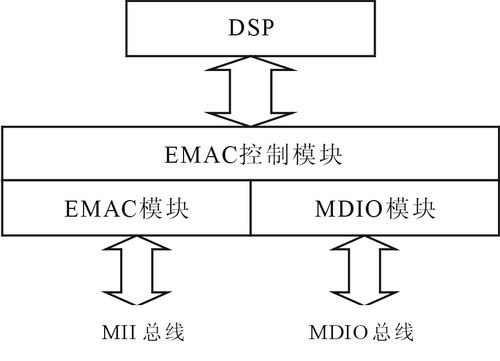 This system uses Broadcom's BCM5221 as the 10/100Base-TX Ethernet transceiver. The MII interface of the BCM5221 is connected to the MII interface of the TMS320DM643. The specific interface is shown in Figure 3. The RJ45 connector uses AMP's 406549-1 with two LED indicators on it and the right LED is green to indicate the connection status. The yellow color on the left is used to indicate data transmission under normal conditions. 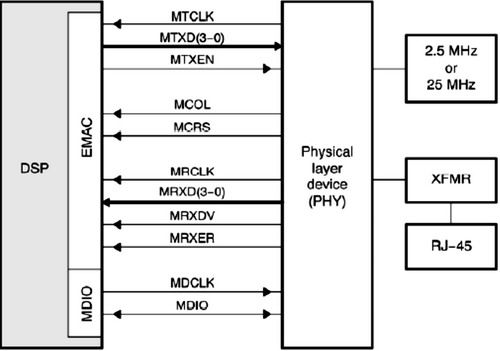 The block diagram of the system software is shown in Figure 4. 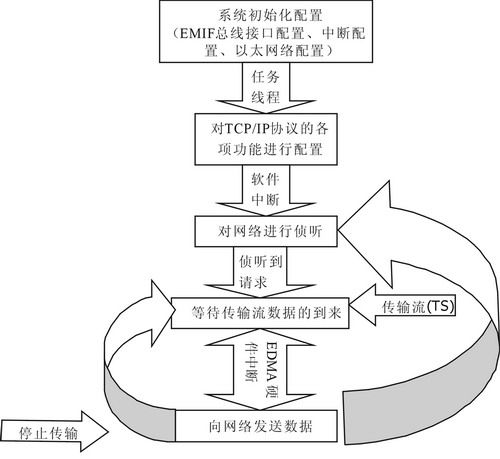 The specific process: the system configuration is mainly done in the initialization function, this initialization function will be called after the .cinit is initialized and before the DSP/BIOS initialization and main function. The system configuration needs to enable the INT8 interrupt, that is, the EDMA transfer interrupt, and set the GPIO7 pin high, so that the PLD module is always in the initial state. The TCP/IP protocol configuration is completed in the task thread, mainly implementing the configuration of the server IP address and gateway. When it is done, the system triggers a software interrupt. In the software interrupt routine, the server generates a port for listening and starts listening for requests on the network. At this point, the server is already on standby, waiting for the client's transfer request.

When the client requests a request to stop transmission, the system will reset the GPIO pin high and the PLD module will return to the initial test state. At this point, the system will be on standby and continue to listen to the network.

In the DSP/BIOS global configuration window, the working clock frequency of the DSP is set to 600MHz. The chip-level support library CSL selected for use is the DM643 library. The small-end access mode is selected. The 256kB SRAM on the chip is used for Cache and is called. Initialize the function dm643_init().

After the initialization program dm643_init() is completed, the system will enter each thread. First, the system will trigger the task thread TSK0, execute the function StackTest() in the TSK0 task thread, first call the NC-SystemOpen() function, complete the initialization of the protocol stack and its required memory, and then create a new system configuration handle hCfg = CfgNew ();, and implement the configuration of the server IP address and gateway. In this system, the IP address is configured as "192.168.0.2"; the subnet mask is "255.255.255.0"; the gateway address is "192.168.0.1". Once configured, the system triggers a software interrupt and is ready to listen to the network.

In the previous task, the IP address and gateway have been configured. In the following, the port is set and listened in the software interrupt. First, you must assign a file environment fdOpenSession( TaskSelf() ) to this report before you start using the report. Then you can create a report object stcp = socket (AF_INET, SOCK_STREAM, IPPROTO_TCP), and set the port sin1.sin_port = htons (1000), set the port number here to 1000, of course, you can also set other port numbers. Then bind the port number to the report object bind(stcp, (PSA) &sin1, sizeof(sin1). Finally enter the listening state listen (stcp, 1).

When the client requests a signal to transmit data, the system will make the GPIO7 pin low and the PLD module will start transmitting data. The DSP receives data by EDMA. EDMA can complete data movement in the DSP memory space by the EDMA controller without CPU involvement. The system mainly uses EDMA's ping-pong method to continuously receive data. The purpose of the ping-pong method is to separate the receiving operation from the sending operation, and to enhance the operability and readability of the program.

Due to space limitations, the network transmission part will not go into details.

The hardware and software functions of this system have been implemented, and the network transmission speed is 2MBps. According to this speed, assuming that the percentage of empty packets in the transport stream is 40%, 5 MBps of transport stream data can be transmitted, and at least 2 to 3 channels of TS stream programs can be transmitted. Therefore, it can be proved that the design method of the system is reasonable and effective.

This article refers to the address: http://